Ogres are a playable race in EverQuest Next.  They are a warlike people, more interested in honour and the glory of battle than in the intricacies of politics.  During the Takish Age, they were enslaved by the Takish Empire, and were not permitted to use magic, own weapons, or even practice their cultural traditions. Despite initial reluctance, they joined the Combine in the latter half of the Dragon War,[1] and eventually learned to wield magic along with the rest of the Combine races.[2]

Ogres thrive on conflict. They are a people of blunt words and decisive actions. Quick to judgment, ogres do not hold back their opinions regardless of who might take offense. Debates are typically brief, as ogres prefer to settle disputes through combat rather than parlay.

Although their aggressive nature has kept them from being a populous race, ogres are master tacticians who take pride in overcoming impossible odds. An honorable death secures a place upon the Warfield, a realm of perpetual struggle where the bravest souls battle to earn the blessing of the Warlord. Those deemed worthy have their sprits cleansed and are reborn to begin their struggle anew.

Ogres relish the thrill of pursuing dangerous game, yet they honor their prey and hunt for need rather than sport. Generations of crafters have developed sophisticated methods of curing and tanning hides, and their leatherwork is prized in bazaars the world over. Renowned for their culinary skills, it is said the tastiest feasts on Norrath are found within ogre celebration halls.

While outsiders often see their society as harsh or even brutal, those who look closer will find ogres to be focused and disciplined. A proud race with rich traditions, ogres are a staunch ally to their friends and a relentless foe to all who oppose them. [3]

Ogre cities are organized and thought out, with walkways and paths passing through tended gardens. Wild jungle growth winds its way onto the flat rooftops, hanging with draped vines and creepers over the massive stone buildings. Large braziers and planters, as well as water features, are common in ogre settlements. They are used to showcase the race's sense of grandeur and culture while reminding visitors of their dominance over the wilds of the Feerrott.

Ogre architecture is built on elevated rises, often featuring open-air porches or balconies. Draped red fabric is used to convey imperial pride and is considered a sign of strength. Ornamental chains are hung to symbolize the unbreakable nature of the ogre spirit. Much of the architecture is deliberately made thick and imposing. Even the finer details, no mater how ornate, are composed of large, broad shapes.[4]

The main character of the eBook The Razor's Edge [5]

Brozka was kept a slave in the city of Tahrin. Later, he became commander of the ogres during the Dragon War, and represented them in the signing of the Combine Accord. 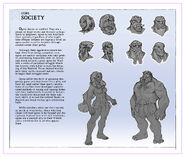 Male and Female Ogre
Add a photo to this gallery

Retrieved from "https://everquestnext.fandom.com/wiki/Ogre?oldid=10004"
Community content is available under CC-BY-NC unless otherwise noted.